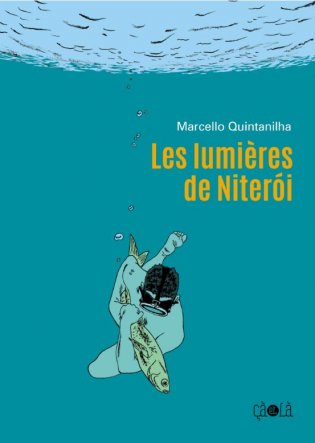 "The art of Marcello Quintanilha lies in this combination of the exciting story and the fast-paced narrative, the thriller and the picaresque." Le Monde

"Marcello Quintanilha shows here all his talent as a draftsman and, above all, as a storyteller." Books

"The spearhead of the new Brazilian comic scene." Livres Hebdo

In 1950s Brazil, somewhere by the beach, not far from Rio, Hélcio (a young and promising soccer player) and his friend Noël, spot someone fishing with dynamite. They decide to take a boat and steal some of the dead fish in order to make some money. The boat trip turns into a perilous journey as the two thieves embark on an adventure that will challenge their friendship. Inspired by the life of Marcello Quintanilha’s father, Hélcio Quintanilha, this graphic novel is both a suspenseful thriller and a wonderful story about friendship. It is breath-taking from start to finish.

Marcello Quintanilha was born in Niterói in 1971, he first published comics in 1988, for magazines such as Mestre Kim, General, Metal Pesado and Zé Pereira, under the pseudonym Marcelo Gaú. In 1999 he published his first graphic novel, Fealdade de Fabiano Gorila. In 2003, he published the first volume of the series Sept balles pour Oxford, by Belgian publishing house Le Lombard. He also started to create illustrations for the Spanish newspapers El País and Vanguardia. He was awarded the HQMIX Trophy as best Brazilian artist. In 2016, he was awarded the Fauve Polar award at the 43rd Festival d’Angoulême, for his graphic novel Tungstène, published by çà et là in 2015 — which was then adapted as a featured film. Since 2002, he has been living and works in Barcelona, Spain.